Last Sunday, I participated a charity run, 4.8km organized by Kenny Rogers with my coursemates. Long time never run for marathon since after Form 6. Last time I did went for practice before running but this time.... I didnt go for any training.... Ends up.... I walk like "penguin" on Monday and Tuesday... T_T
Well... we have to pay before participating Chicken Run. RM46 per person if you are registering in group of 10 person... Expensive huh? But is ok la... It is for charity... And KRR does give us lotta attractive freebies... An entrance ticket to Lagoon 3-parks, a kenny rogers quarter-meal, a t-shirt, some shampoo and drinks... So... RM46 is actually worth with all the freebies... hehehe
The running supposed to start at 8am... it is not punctual at all as we still doing some exercise with all the participants at 8am+. I guess we run at 8:25am? or later? em... forgot to look at my watch b4 running... And this is not an ordinary running because each of us is suppose to hold a cone with egg while running... If the egg is broken, you will be disqualified... I guess not many has broken the egg... Just the cone will be soften and "kemek" as we were sweating while running... lolz...
I reach the ending point at 9am+... It is super tiring... What to do? I'm old already... haiz 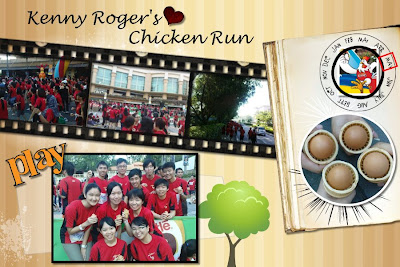 Then we had a blunch at Subway before playing in Lagoon. We are forced to use the lagoon ticket on that day. I thought Lagoon will be flood with a lot of people since they were total 3000+ participants. But I think it is still alright. The queue for dry park is not too long. Just like normal weekend I guess? Perhaps many people have left after running for an hour time. Good to us.. Thanks god!!! 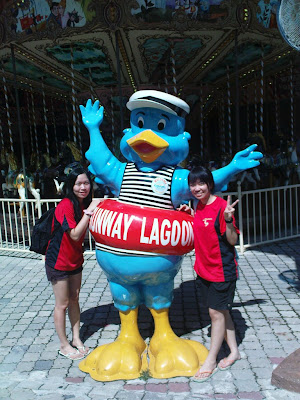 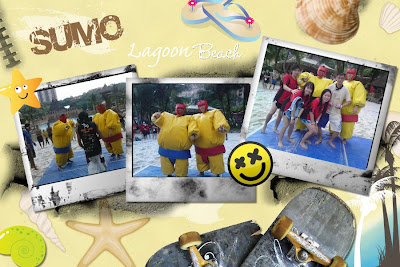 After playing in Lagoon, we went to Pyramid's Kenny Rogers Restaurant for our dinner... It is super long queue outside the restaurant... What to do? Everyone wants to redeem the free quarter meal... 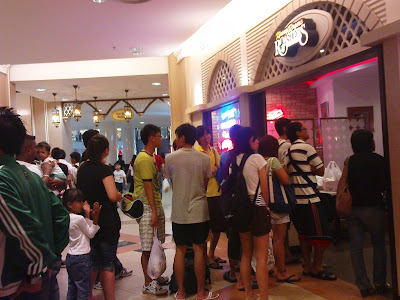 Reach home at around 7pm. It is a super tiring day. One day trip in Sunway. I'm now darker since Sunday was a sunny day... is ok... Now... waiting for my next weekend trip.... SKYTREX... hope i am brave enough to complete all the challenges.. ^^
Posted by Unknown at 10:18 AM No comments: